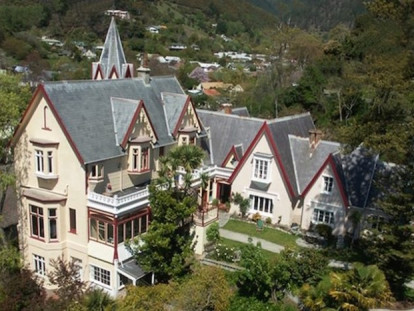 Warwick House is a magnificently restored stately home the property offers further opportunities of development and is currently operating as a Luxury Boutique Hotel near the CBD of Nelson City.

This exceptional property is situated at the foot of the beautiful hills overlooking Nelson city to the Tasman Sea and beyond.

The property includes private guest rooms, including five lounges, eight bathrooms and two extra toilets. The original wing is currently the owner’s residence and could be developed into four or five additional suites.

There is an option to reinstate the resource consent to build a self-contained apartment over the garage which would be ideal for a manager.

Historic Places Trust category II registered building that was built on the original 20 acre site in 1854 for a successful merchant, Alfred Fell, it was often described as the grandest and most luxurious home in New Zealand.

This solidly constructed, 810 square metre building was very strongly built throughout with great beams of kauri and 28 millimetre thick matai floors. All weatherboards, ceilings and most doors are heart kauri. Weatherboards on several sides were covered with a heavy stucco render in the 1950s, which gives it the distinctive castle appearance.

The exterior is now painted rich Colonial cream, with burgundy timber joinery and the original 7000 tiled, high pitched Welsh slate roof. In recognition of the huge amount of restoration work done on Warwick House my vendors were presented with the 2009 Environmental Award, in the Heritage Site category.

Over the past few years, this superb home has hosted many distinguished guests, held many charity fundraisers, hosted tours, high teas and many great musical events.

The original wing is the current owner’s home which has two spacious living areas, a charming dining/conservatory, kitchen, five bedrooms and two bathrooms

This is one of New Zealand’s most attractive tourism & hospitality businesses for sale and allows the next owner to take this awesome property to the next level of development.

For more information or to arrange a viewing please contact Dilan De Silva on 027 444 9692.